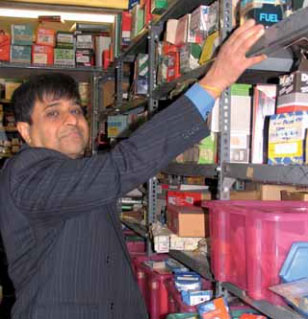 Nitin Mehta’s every action since coming to this country proves his declaration that he’s “proud to be British” and his dedication to service has been recognised at the highest levels Community is a word that features large in Nitin Mehta’s vocabulary. Community in the immediate sense – life in Croydon – and community in the wider meaning – on a global scale. And it encompasses all aspects of community, be it how we conduct ourselves, our diet, the animals around us, our immediate surroundings and the way we treat the planet on which we live.

Now a managing partner, with his older brother Kirit, of Croydon Motor Spares in Broad Green, the 19-year-old Nitin came to England from the family home in Kenya in 1973 and his community philosophy exerted itself almost immediately as he played a key role in two local initiatives. He was an enthusiastic member of the Keep the Pond Tidy campaign from 1974 to 1976, helping to persuade businessmen based around Thornton Heath Pond to put their hands in their pockets to provide extra waste bins and to help keep the area as litter-free as possible. Also in 1974 he became a voluntary teacher of the Gujarati language to young students – a commitment he was to honour for 20 years. All this was going on as he held down a succession of jobs while also studying in the evenings for a sociology degree at Goldsmiths College. “I wanted to play a positive role in the community and that’s something I’ve tried to do over the years,” said Nitin. “This country has offered us a lot and the Indian community has done well in every field. We’ve prospered and we have to put something back into the wider community.

“While we have rights, we also realise we have obligations and it’s important to have a balance. At the end of the day we want a nice prosperous Croydon and, by extension, a prosperous UK.”

Nitin voices a genuine pride in his hometown and plays a leading role in the Croydon Partnership, investing in the town and ensuring there are job opportunities: “We’re flying the flag for Croydon.” Over the years he has served on the executive committee of the Croydon Guild of Voluntary Organisations; the committee of the Hindu Temple in South Norwood; Croydon Police Consultative Committee and was the governor of Croydon College for six years. He led a group of young performers at the VE Day celebrations in Hyde Park; helped found the Jain Animal Sanctuary in Burwash, Sussex; is a stand-by volunteer for Croydon Nightwatch, which runs a nightly soup kitchen for the homeless in The Queen’s Gardens in central Croydon and, for the past 25 years, has hosted a Christmas lunch to which a cross-section of the community is invited.

Recognition for his tireless work came in 1999 when he became an MBE in the Queen’s Birthday Honours. “That was the icing on the cake. Somebody puts your name forward and, the next thing you know, you’re offered the award. I was well pleased and the community was well pleased.”

On the question of law and order, he is full of praise for policing in the borough. “Between Croydon’s police and the community we’ve obviously got something right. “In 25 years there’s never been a major flare-up or incident. A lot of that has been down to the police and very good communication – we’ve always had strong links with the police.”

A born vegetarian, he has been a vegan for many years and was the founder president, in 1978, of the Young Indian Vegetarians. He is a firm believer in the value of a meat-free diet and is on the board of directors of Compassion in World Farming. “Food is a great way of breaking down barriers. My passion is to introduce the great British public to the delights of Indian vegetarian food, of which there’s a great variety. “This all ties in to my belief that we have to leave the planet in good order for future generations. A meat-free diet is paramount.” He decries a system whereby we raise and kill 55 million animals every year, pointing out that the amount of grain used to feed them could feed almost four billion people, which would help the fight against world poverty and starvation. He is also vehemently opposed to modern fishing methods that result in everything in the path of huge factory trawlers being arbitrarily scooped up, regardless of what’s being actually fished. “We should all look at our lifestyles and carefully consider how we can help the planet.”

Another concern is the state of the National Health Service: “The NHS isn’t able to cope with the growing number of sick people and, again, diet and a close examination of our lifestyles would only help matters.” An exponent of yoga for the past 15 years, Nitin is convinced that if more people practised the exercise and relaxation techniques the NHS would be in a much healthier position. “It’s our responsibility to look after ourselves. The more healthy people we have, the more money would be available to go into the economy and the NHS would be less of a burden on the country. “That requires a shift to a belief in prevention, rather than finding a drug to cure every illness.” One aspect of community that Nitin is not so keen on is the question of members of the UK’s ethnic populations attempting to put right problems in their countries of origin. “Members of the Indian community know we must integrate; this is our home and anything that happens to it affects us. “It’s important not to get involved in the politics of the mother country. That should never, ever, happen. All it does is bring the conflict here, it never solves it. “We’re here to help build a strong Britain; to build on its core values, such as justice, equality and integrity, all the good things that are going on in this country. “We have to put back into the community, to make it run better. We’re very proud to be British, no matter the ethnic background.”