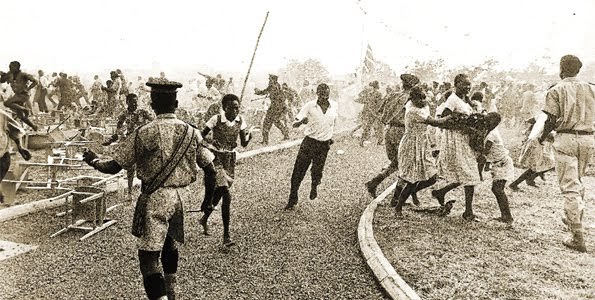 October 25th 1969 was a fateful day in Kenya’s history. The president Jomo Kenyatta was coming to open the, ‘Russian Hospital’ in Kisumu. The New Nyanza General Hospital was better known as the Russian Hospital because it was built by the Russians.

I was 15 years old then and as was the norm at the time, children from my school were asked to attend the event as a welcoming party. For those who remember, security used to be very tight during the president’s visit and there was always tension and fear in the air. As the president was giving his speech someone picked up a chair and threw in his direction. What followed was absolute mayhem. The policemen started beating up people with the rungus (long wooden sticks) and people were running in all directions. The presidential guards opened fire and the presidential motorcade made a hasty escape.

It was at this point that some of us students did something very stupid. We started making the, ‘thumbs up’ sign to the presidential escort cars. The thumbs up ‘dume’ sign were the sign of Jaramogi Oginga Odinga’s party, the Kenya People’s Union. Seeing us making those gestures the bodyguards were seen smiling and taking pot shots aiming mainly to the ground. My friends and I were simply too young to realise that our mischief could have had grave consequences. At least 10 people were known to have died in the whole incident.

Mr. Oginga Odinga and many of his close supporters were detained shortly afterwards and I clearly remember the tension and fear in the country at the time. Pranlal Sheth one of the greatest Indian activist who played a fearless role in campaigning against the British Colonial rule in Kenya and was Odinga’s lawyer and confident,was deported to India by Mzee Kenyatta in 1966. It is believed that Kenyatta summoned Pranlal Sheth and told him to desist from representing Mr. Odinga. Pranlal Sheth had the guts and the gumption to refuse.