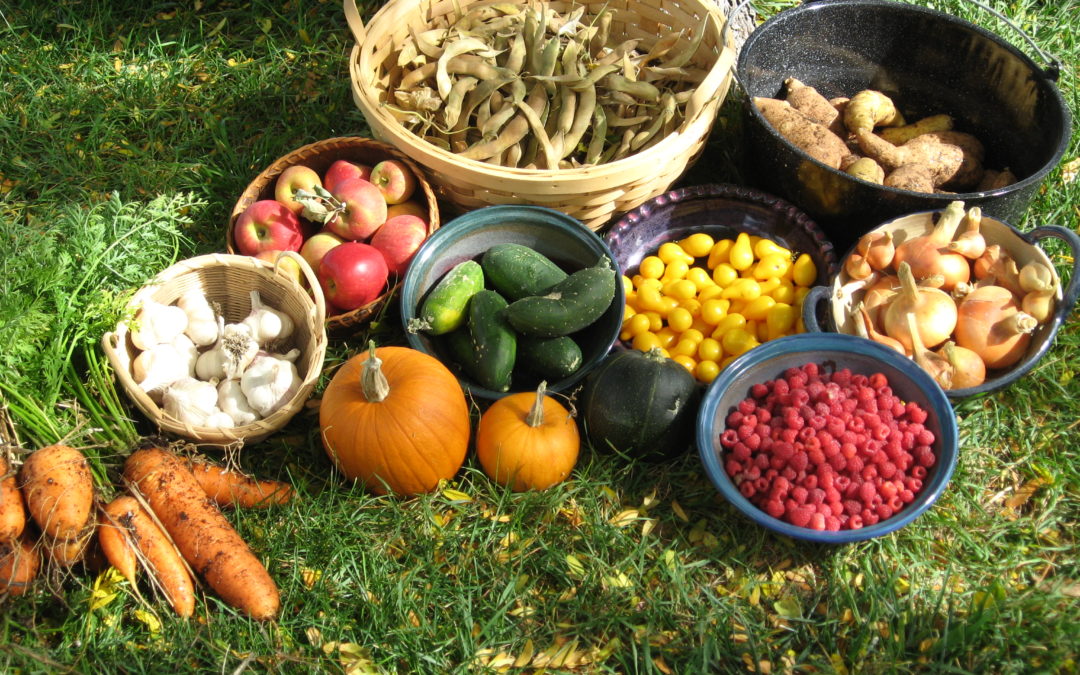 There are 4 very important benefits of a vegetarian diet:

Let us first look at the ecological damage meat consumption is doing to the planet. A staggering 55 billion animal are raised for meat every year. There are 15.4 billion chickens, 1 billion pigs and 1.3 billon cattle at any time in the world. These animals produce 1 billion tones of waste polluting our rivers and waterways.

An average meat eater will eat 760 chickens, 5 cows, 20 pigs, 26 sheep and half a tonne of fish in a life time. On average a person will eat 30 tones of food in a lifetime.

On present trends, the rain forests will disappear by 2030. Deforestation is responsible for 20% of all carbon dioxide released in the atmosphere. 20% of all methane gas emissions are due to farm animals. The rainforests are the lungs of our planet and an ecological disaster of unimaginable magnitude is inevitable.

Almost one third of the world’s entire surface is rapidly advancing towards becoming desert because of over grazing, which is breaking down soil structure, reducing its fertility. The USA has lost 40% of its top soil and continues to lose 5 billion tones every year. Entire civilisations have disappeared due to soil erosion.

Animals raised for meat produce 13 billion tonnes of effluent every year – causing a high level of ammonia and nitrate pollution of land, water and sea. In North Carolina a centre of intensive pig farming there are 7 million pigs producing 4 times more waste then the state’s 6.5 million people. An egg factory with 60,000 hens produces 165,000 pounds of excrement. Animal manure releases ammonia causing acid rain which kills fish and trees as well as poisoning water.

Almost 90% of the world’s water supplies are used up in meat production – a criminal waste in an already thirsty world. To produce 1 pound of wheat you need 25 gallons of water. To produce 1 pound of meat you need 2,500 gallons of water. A kilo of wheat needs 900 litres of water but a kilo of beef needs 100,000 litres of water.An average size poultry plant, killing four thousand birds every hour uses approximately 459 million litres of water every day enough to supply the needs of 25 thousand humans.  The ecological ‘footprint’ of a country is the amount of land needed to supply all resources it consumes – the ecological footprint of meat is significantly larger than it is for plant foods.

With a staggering 55 billion animals raised for meat every year – such is the demand for animal feed that poor countries are encourages to grow animal fodder rather then food that can feed them. The amount of Soya fed to cattle could feed the whole population of India and China. Almost 50% of the world’s maize is fed to animals – thus depriving poor Africans of a protein rich food.

20 vegetarians can be fed on the amount of land needed to feed one person consuming a meat based diet. Only 40% of an animal is edible–the feet and tails etc are not edible. The world population is set to grow to over 9 billion by 2050 – mass starvation and a ecological catastrophe is inevitable unless humans move away from a meat based diet.

Industrial fishing is destroying the ecosystems of our oceans – killing whales, dolphins, coral reefs and mangrove forests. 50% of all fish caught is fed to other fish in a cannibalistic merry-go-round. In 2004, 85 million tones of wild fish, 100 million sharks, and related species, 259,000 turtles and 300,000 sea birds were killed. Fish farms are the biggest pollutants. Mangrove forests in South East Asia and Latin America are being cleared for fish farming. Fish waste, antibiotics, pesticides, DDT, zinc, copper and mercury pollute the rivers. Fish are contaminated with all these and are therefore bad for health.

Three quarters of agricultural land in the European Union is used as grazing land or in feed crop production.

By 2050 the amount of grains fed to livestock population will be enough to feed an extra 4 billion people. There will be 9.3 billion people by 2050 and a fundamental shift from a meat based diet to a vegetarian and vegan diet is vital if mass starvation is to be avoided.

20 years ago Egypt was self sufficient in Grain production– it now imports 7 million tones, as meat consumption has grown enormously. China which used to be a net exporter of soya and wheat is now a net importer because of the enormous growth in meat eating. The ecological ‘footprint’ of a country is the amount of land needed to supply all resources it consumes. The ecological footprint of meat is significantly larger than that is for plant foods.

According to a new report published by the United Nations Food and Agriculture Organisation (UNFAO), the livestock sector generates more greenhouse gas emissions as measured in CO2 equivalent – 18 percent – as opposed to transport which emits 13.5%. It is also a major source of land and water degradation. It is also the exacerbating factor in 15 out of the 24 vast global ecosystems that are in decline. One third of global cropland is used up in growing animal feed.

Henning Steinfeld, Chief of UNFAO’s Livestock Information and Policy Branch and senior author of the report commented: “Livestock are one of the most significant contributors to today’s most serious environmental problems. Urgent action is required to remedy the situation.

”With increased prosperity, people are consuming more meat and dairy products every year. Global meat production is projected to more than double from 229 million tones in 1999/2001 to 465 million tones in  2050, while milk output is set to climb from 580 to 1043 million tones. “The environmental costs per unit of livestock production must be cut by one half, just to avoid the level of damage worsening beyond its present level,” the UN report warns.

When emissions from land use and land use change are included, the livestock sector accounts for 9 percent of CO2 deriving from human-related activities, but produces a much larger share of even more harmful greenhouse gases. It generates 65 percent of human-related nitrous oxide, which has 296 times the Global Warming Potential (GWP) of CO2. Most of this comes from manure. And it accounts for respectively 37 percent of all human-induced methane (23 times as warming as CO2), which is largely produced by the digestive system of ruminants, and 64 percent of ammonia, which contributes significantly to acid rain.

Livestock now use 30 percent of the earth’s entire land surface, mostly permanent pasture but also including 33 percent of the global arable land used to producing feed for livestock, the UN report notes. As forests are cleared to create new pastures, it is a major driver of deforestation, especially in Latin America where, for example, some 70 percent of former forests in the Amazon have been turned over to grazing. India uses 37% of arable land to grow fodder for animals that are raised and killed for meat.

At the same time herds cause wide-scale land degradation, with about 20 percent of pastures considered as degraded through overgrazing, compaction and erosion. This figure is even higher in the drylands where inappropriate policies and inadequate livestock management contribute to advancing desertification.

The livestock business is among the most damaging sectors to the earth’s increasingly scarce water resources, contributing among other things to water pollution, euthropication and the degeneration of coral reefs. The major polluting agents are animal wastes, antibiotics and hormones, chemicals from tanneries, fertilizers and the pesticides used to spray feed crops. Widespread overgrazing disturbs water cycles, reducing replenishment of above and below ground water resources. Significant amounts of water are withdrawn for the production of feed.

Livestock are estimated to be the main inland source of phosphorous and nitrogen contamination of the South China Sea, contributing to biodiversity loss in marine ecosystems.

Excessive meat consumption has played a key role in the increase in heart disease, cancer, obesity and diabetes. In the US 23% of adults are now considered obese and their health problems cost $ 118 billion dollars a year. In the UK 165,000 people die of heart disease every year which would go down to 40,000 if every one was vegetarian. Worldwide 150 million people are now diagnosed with type 2 diabetes and this is set to double by 2025.

A pan-European study of nutrition and cancer found that people who ate more than two 80g portions of red meat a week were 30% more likely to develop bowel cancer than those who ate less than one portion. Researchers have also found that a diet rich in plant foods can reduce the chances of developing Alzheimer’s disease. Eating red meat every day also could double the risk of developing rheumatoid arthritis. Red meat is one of the first foods doctors advise patients to stop eating if they are at risk of heart disease because it contains of high levels of dietary cholesterol.

Beef, lamb and pork are the cause of one in six outbreaks of food poisoning. A study from Harvard Medical school suggested that eating more than 100g of red meat a day would double the risk of a woman developing breast cancer. Links have also been made between meat eating and prostate cancer.

Human beings crave for peace and yet inflict so much  cruelty on animals. By treating animals with compassion and by granting them some fundamental rights we humans will be at peace with ourselves and save this planet for future generations. A plant based vegetarian and vegan diet is crucial for our survival. Let us be the change we want in the world.